Stand up for what is right even if you are standing alone... 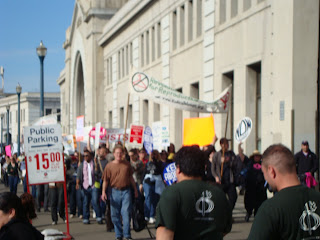 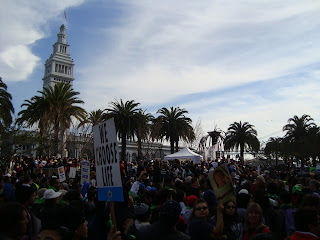 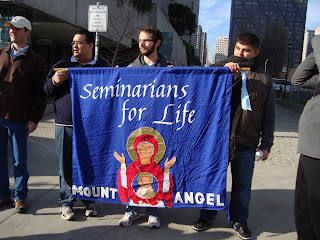 Today was the seventh annual West Coast Walk for Life in San Francisco. Just as it was last year, the experience of taking part of this walk was a moving one. We arrived at St. Patrick's Seminary the night before after a 12-hour bus ride. After praying vespers in their magnificent seminary chapel, we headed towards their "refectory" (dinning hall) for a social. It was a great time to catch up with old friends that graduated from Mount Angel Seminary.
This was my second pilgrimage to San Francisco for the West Coast Walk for Life. The first time I was here, I had to be my own tour guide. I am grateful to Manolito Jaldon for being my host, tour guide, and taking me to University Avenue of Stanford University to drink some Starbuck's.
The summit of our pilgrimage was on Saturday. Mass was celebrated by Archbishop Niederauer in a packed Cathedral along with several Bishops of California. Priest, religious, seminarians and they laity gathered to pray for the end of the cultural of death in our country. Right after mass, our bus took us to the start of the walk at Justin Herman Plaza in Downtown San Francisco.
A short line up of speakers helped motivate the crowd of more than 40,000 pro-life activists. Immediately after the speakers, the short 2.5 mile walk began along the waterfront. Along the way, there were a small group of Pro-choice protesters on the sidewalk. I realized that the crowd of 40,000 peacefully walked, some with rosaries in their hands, and the small group was screaming and yelling for "choice". What sadden my heart was seeing a child not more than 7 years of age holding a sign for abortion on demand and with her parents yelling to the Pro-life activists. How can parents bring their child to a pro-choice protest?
We walked past the tourist ridden waterfront and my attention was caught by the stores, restaurants, and sidewalk attractions. My bliss was broken when I almost tripped on someone. Towards the end of the walk, the way became narrower and slowed down. In order to get to Marina Green you have to walk up a hill. A profound moment was when I got to the top of the hill and looked back, I saw a mile long trail of people behind me like an ant colony. This sight was an illustration of the body of Christ for me.
When we got to the end of the walk, I decided to go to Safeway to grab a bite. Out of nowhere a woman starts calling my name. At first I said to myself, "Other than seminarians, who in San Francisco know me?" I turned around to the source of voice and saw Elma Amboy (Rivera), a woman that I met in Hawaii many years ago through Blessed Sacrament Prayer Group. The last time I met her was last year at the walk for life in the midst of the crowd. Before this year's walk for life, we connected through Facebook and hoped to see each other again. Unfortunately we weren't able to make any plans to meet. So unexpectedly seeing each other at the Safeway was truly providential.
The West Coast Walk for Life this year was a moving one filled with many profound moments. It was disappointing to see that the news highlighted the pro-choice side only and failed to report the number of people gathered at the Walk for Life.
Posted by humbledservant808 at 10:07 PM

Me in the Co-Cathedral